So I have this problem ... Well it's not really a problem - I can stop whenever I want, really I can. My problem is that I have a thing for tiling window managers (WMs)1. I love the efficient window management, keyboard focussed operation, extensive customisability and lightweight feel that most tiling WMs offer. For the X Window System 2 there's an awful lot to choose from, and I've been obsessed for some time now with finding a great tiling WM that works for me and then configuring it to perfection.

I've spent an embarrassing amount of time installing, learning about, configuring and tinkering with tiling WMs. Over the last 6 years I've tried out, with at least some seriousness, all of the following:

These tiling WMs all have their pros and cons but I've ended up settling3 on awesome (version 3) as it is stable (i.e. not someone's project that was never finished and hasn't been touched in years), highly customisable (almost everything can be changed using Lua), sane to configure with sensible defaults, handles multiple monitors well and lacks irritating bugs.

I use awesome both at home and at work, and until recently I'd been maintaining two separate configurations. After being frustrated by the process of repeatedly synchronising changes between the two configurations, I decided to merge the two and clean up a bunch of stuff at the same time.

The result can be seen on GitLab at: https://gitlab.com/menn0/awesome-config

My goals for the new configuration were:

Some highlights from my configuration:

Note that I'm by no means a Lua expert. I'd love to hear feedback on what I've done from more experienced Lua developers and awesome users.

If you're new to tiling window managers, I hope this post has piqued your interest (or at least hasn't put you off them!). If you're already using awesome, I hope I may have encouraged you to re-think your configuration. I know I'm obsessive about these things, but I think there's much to gain from optimising the way you interact with the software you use the most, and your window manager certainly meets that criteria.

Update: As requested, a screenshot of how my config looks (on my laptop). 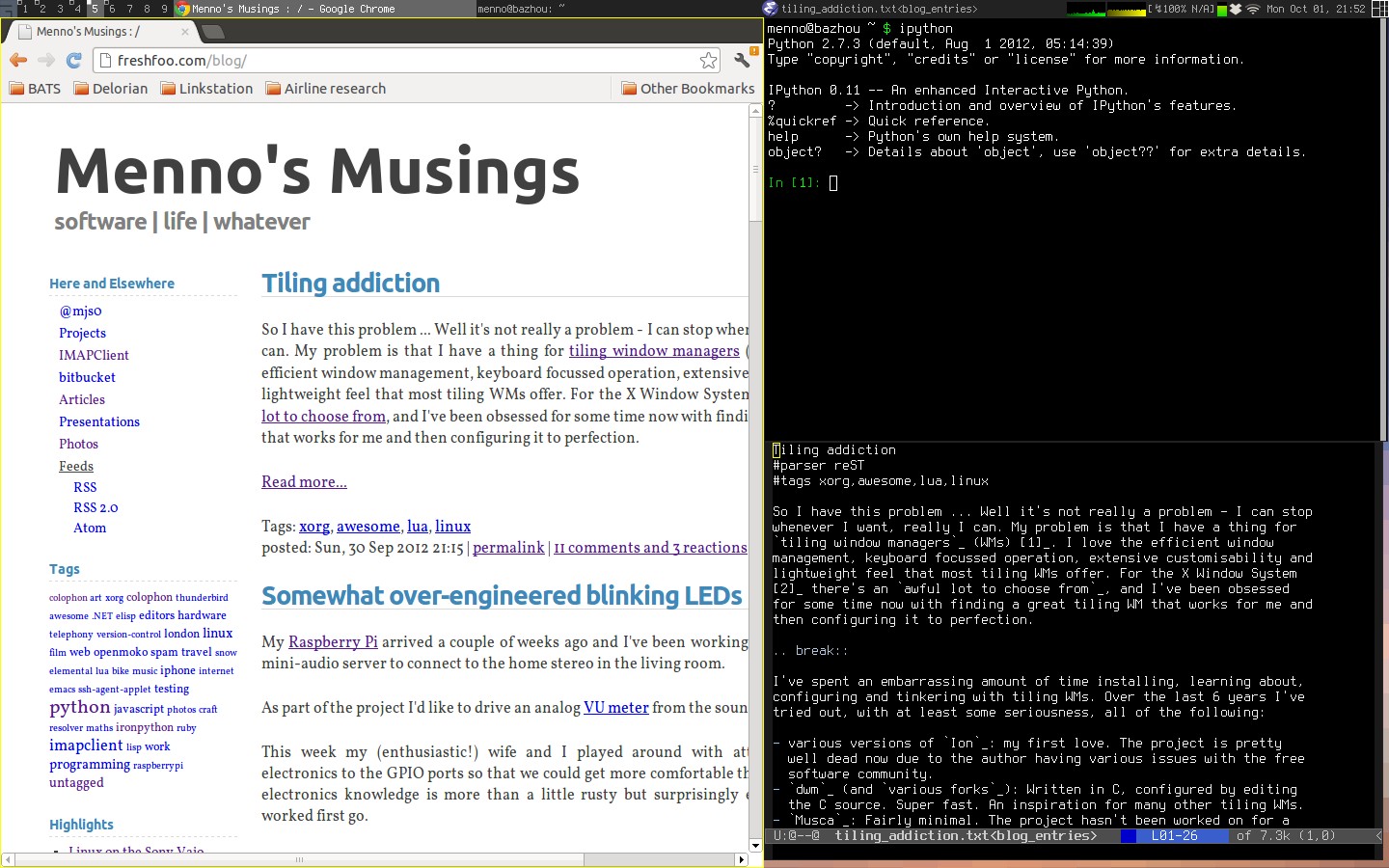 The panel at the top has from left to right: a button for the application launcher menu, the tag (workspace) list, a window list for the current tag, CPU and memory usage graphs, a battery widget, volume widget, system tray (containing the Dropbox and Network Manager icons), a clock and a awesome layout indicator applet. Most/all of the UI elements are implemented in Lua.

Three application windows are shown in the tag, organised using the "tile" layout. Chrome in the "master" position with Emacs and a shell off to the right.

If you're unsure what tiling window managers are about, or why you'd considering using one, there are a few useful pages around.

I use Linux almost exclusively.

By "settled" I mean, "have used exclusively for about a year now".

The same goes for your editor configuration, but that's another story.